I just sent off the next Sketchbook (Vol. 14) to the Brooklyn Art Library.  My first Sketchbook has been doing well.  At this moment it has been viewed online 742 times!  It has been checked out in person 6 times and favorited by 5.  I’m pretty happy about that.  You can see it here.

This Sketchbook needed to be postmarked by today, March 30, in order to be included in this round.  You all know that I’ve been moving into the new studio so I haven’t had a chance to work on it (procrastination abounds since it was actually due in February (d’oh) but they gave us an extension, thank goodness).  Anyway, I worked like crazy and finished it this morning and sent it off this afternoon. 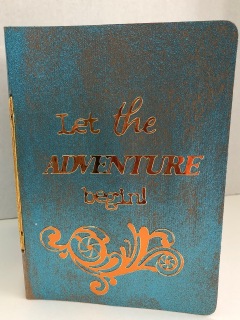 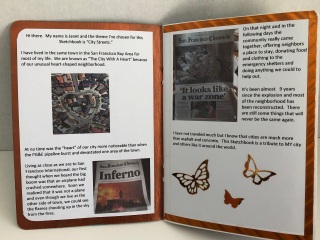 I wrote the opening about the heart-shaped street we have in our town and the explosion in 2010 when a gas pipe erupted. 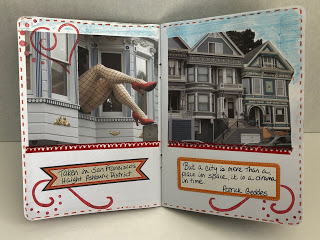 These pictures are from our visit to the Haight Ashbury District in San Francisco a couple of years ago during the “Summer of Love” tour.  I couldn’t get over the legs sticking out of the window and I love the Victorian houses.

Really sad that we are not going to be able to see Bob Seger when he does his last tour.  We had tickets and then he had to have spine surgery.  When they rescheduled the rest of the tour, they left our area out.  Good thing we’ve seen him twice.

I know that the song Dancing in the Street has been done by a few people but I like Mick Jagger’s version.

And, of course, my Journey!  Perhaps they were in Los Angeles but everyone knows they meant San Francisco in their hearts!

I thought this was an interesting quote by Virginia Woolf and it made me want to read more of her work.  I probably read some in high school but who remembers that?

Such a simple lesson.  Too bad we don’t follow it more often.  Sweep in front of your own house and the streets will be clean!

I’ve never been to Paris but I can imagine that the streets are filled with interesting sites.

Herb Caen had some pretty good stories in his day.  I love the way the City looks at night.

This looks like so much fun!  Floating along the river while eating lunch or dinner.

I’ve been down some old town streets like this.  They are usually full of great antique shops.  Could spend hours wandering up and down them.

Another interesting place to hang out.  I can see I have to get out more! 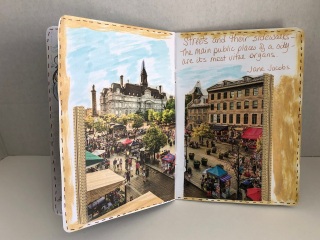 This reminds me of the Farmer’s Market in City Plaza that we used to pass when we were on the way to the Workers’ Comp hearings we had to go to for my husband’s back injury.

Y’all know I love my gnomes! 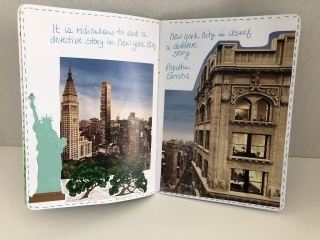 It is fun to include Agatha Christie in my work. 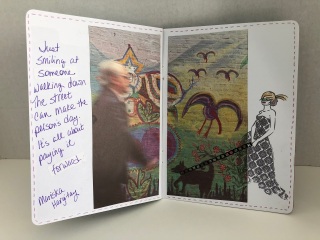 I was really happy to find this quote by Mariska Hargitay.  She has the right attitude about smiling!

It’s not perfect but I’m pretty happy with it.  Some pages I like better than others and I can see a couple of spots that I might have done differently but overall I’m pleased.  I’d love to hear what you think!
There is another edition out now and I’m really thinking about doing another one but I have to get over the A to Z first.  We have until November to order and it is not due until February 2020 so I have some time.  This week they are offering the books at 20% off though so if you are considering doing one, nows the time to get it!  I can tell you it is really exciting to get an email telling me that someone has viewed my book or to see that the number of online views keeps growing.  I’m not going to make any “dough” from it but I might get some exposure that I wouldn’t ordinarily get since I added my business information at the back of the book.
(The “d’oh” and “dough” are added as part of Linda G. Hill’s Stream of Consciousness Saturday)!

Figuring Out the Stuff Between the Beginning and the End

creating order out of chaos, and vice versa