In Tune With June – Believe It or Not

Each year for the past few years I have chosen a word of the year.  In 2014 it was “Courage” and in 2015 it was “Change.”  In 2016 it was “Focus” and this year it is “Believe.”  Throughout the year I try to incorporate that word into my life in lots of different ways.  Some are obvious, some not so much.  I wear it in a locket around my neck and I have little notes in different spots on my planners and things. 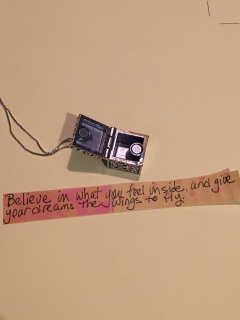 Sometimes the word shows itself to me in very unexpected ways.  The background:  We were offered 4 free nights in Reno, which is our usual getaway at this time of year to celebrate our anniversary (33 years) and so I booked them for the end of May.  My husband has been retired since June of last year and we are living on his retirement and pension plus my transcription work (I am self-employed doing medical transcription for the last 16 years).  Things were going reasonably well and since it was Memorial weekend I figured I could take a few days off.
Then little things began to pop up that made me have some second thoughts.  Bill was injured at work a few years ago and we are expecting a settlement from his Workers’ Comp which I was hoping would come before the trip.  It did not.  During the weeks before we were set to go I lost one of my transcription clients (he retired without warning) and the volume from another major client has significantly decreased so my income basically has been cut in half overnight.  I really agonized about whether to cancel the trip and stay home and was trying to think about ways that I could start to supplement my income – maybe even go out in the “real world” and get a job.  I decided we should go ahead and go on the vacation and we could start exploring new ideas when we got back.  After all, the hotel rooms were free and we were going to be doing some inexpensive, fun things while we were there.  If our financial situation is changing, we probably won’t be able to do a trip like this again for a while.
While in Reno we went on a Big City Hunt which I wrote about in a previous post.  One of the places we were led to was a sculpture in the middle of the city.  We approached it from the side and all I could see at first was a tall metal piece with birds cut out in it.  Bill was a bit ahead of me and he said, “Honey, look at what it is.”  As I turned the corner to see the whole sculpture I just lost it and started crying.  This is what I saw: 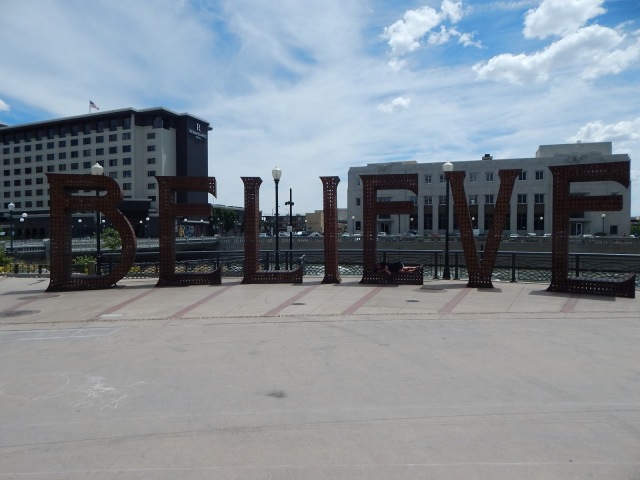 Even with the person sleeping on the bottom leg of the middle “E” it was still very impressive.  I felt like a shock went through me.  I held onto Bill and the tears just came.  I had not told him of my concerns because I didn’t want to worry him and then when I started crying, I explained my fears.  He held me and being the sensitive guy he is, he totally got what I was feeling.  There was another couple there and we took their picture in front of the sign and they took ours.  Don’t know why we didn’t move to one of the other letters so the guys feet wouldn’t be in the picture.  Guess I was still a bit emotional.

Then Bill took one of me:

Talk about a sign, huh?  We had a really good time while we were away and now that we are home, I believe that we will find a way to make things work.  I have to.
How about you?  Ever get a sign like that?  Do you pick a word for the year?  Have any transcription work you need done?  Want me to make a special scrapbook album for you?  I have some time 🙂

I'm a 60-ish, married, mom to 3, creative soul looking to make the world a better place one smile at a time.
View all posts by scr4pl80 →
This entry was posted in Believe, Big City Hunt, Reno, word of the year. Bookmark the permalink.

4 Responses to In Tune With June – Believe It or Not

How you see life depends on how you look at things

How to be a vulnerable leader